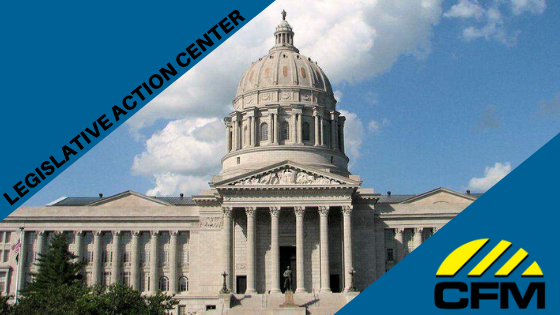 In late 2019, CFM launched its new Legislative Action Center. The new action center uses a different software program than what was used in previous years, and is extremely user-friendly. You only have to sign-up once, then there is no user name or password to remember. Easy!
The homepage of the Legislative Action Center lists both state and federal bills that CFM has decided are worthy of people taking action on to support or oppose. For each of these bills, the website provides a summary of the bill and a “Take Action” button. When you click on the “Take Action” button, a letter is generated that is pre-populated to send to your specific state or federal representatives/senators. You can add your own statements to the letter to customize it with your specific thoughts about the topic. Then you can click a button to email the message to your representatives/senators, or print a hard copy to mail on your own. Easy!
There are also buttons you can click to find the phone number of your representatives/senators, along with example talking points about a particular bill. For federal representatives/senators, you can also send Tweets or Facebook posts to their social media accounts. Whether you decide to email, call, Tweet, or Facebook your opinion to your representative or senator, any of these options take just a couple minutes. It’s easy!
If you receive the Stream Teams United weekly #MOWater News email, you will see that we are tracking state level legislation for the current session which began on January 8 and concludes on May 15th. Each week, we review the status of bills and update our email to include new bills and pubic hearings at the state capitol for the following week. By staying informed through our weekly Legislative Lookout and the CFM Legislative Action Center, together we offer tools to make advocacy easy!
If you have not already, I encourage you to sign-up for CFM’s Legislative Action Center and explore the website to see how easy it is for your voice to be heard.

This article was originally published in the Missouri Team Team Channel's Newsletter, found here.
Sign Up Here
Support Us