Thank you to the Missouri Stream Teams that joined us on October 26 and 27, 2019

As Stream Teams, when we think of invasive species that have negative impacts on aquatic ecosystems, we likely first think about species such as zebra mussels, rusty crayfish, Asian carp, snakehead fish, and Hydrilla (Hydrilla verticillata) that actually live in water. However, terrestrial invasion of a watershed by non-native species can also affect stream communities.

The Missouri Invasive Plant Task Force (MoIP), a part of the GrowNative! program of the Missouri Prairie Foundation, recently completed a Missouri Invasive Plant Assessment and made the resulting maps available in 2019 on their website http://moinvasives.org/. Maps (142 total!) were created that illustrate the impact of environmental degradation, abundance, and trends for invasive plant species in Missouri.

Stream Teams United was recently awarded a Wholesale Impact Grant from Patagonia to encourage and equip Missouri Stream Teams to remove invasive non-native plants in the Missouri River corridor from Hermann to St. Louis. As part of this effort, we hosted a training workshop for Missouri Stream Teams and the public on Saturday  October 26, 2019 at the Weldon Spring Interpretive Center on Hwy 94, just west of the August A. Busch Memorial Conservation Area. The following day, October 27, we hosted a field work day to remove bush honeysuckle from locations on the Busch Conservation Area.

As you make plans for Stream Team activities, consider projects your Team can do to remove invasive plant species from your local watershed. As always, be sure to receive landowner permission for both private and public lands before starting plant removal projects. Want to brush up on Asian Bush Honeysuckle? See Stream Team Academy Fact Sheet #28 at www.mostreamteam.org and learn more at http://stophoneysuckle.org/.

Through a Wholesale Impact Grant, Patagonia has provided funding for our bush honeysuckle removal project to unite Stream Teams for watershed restoration projects. 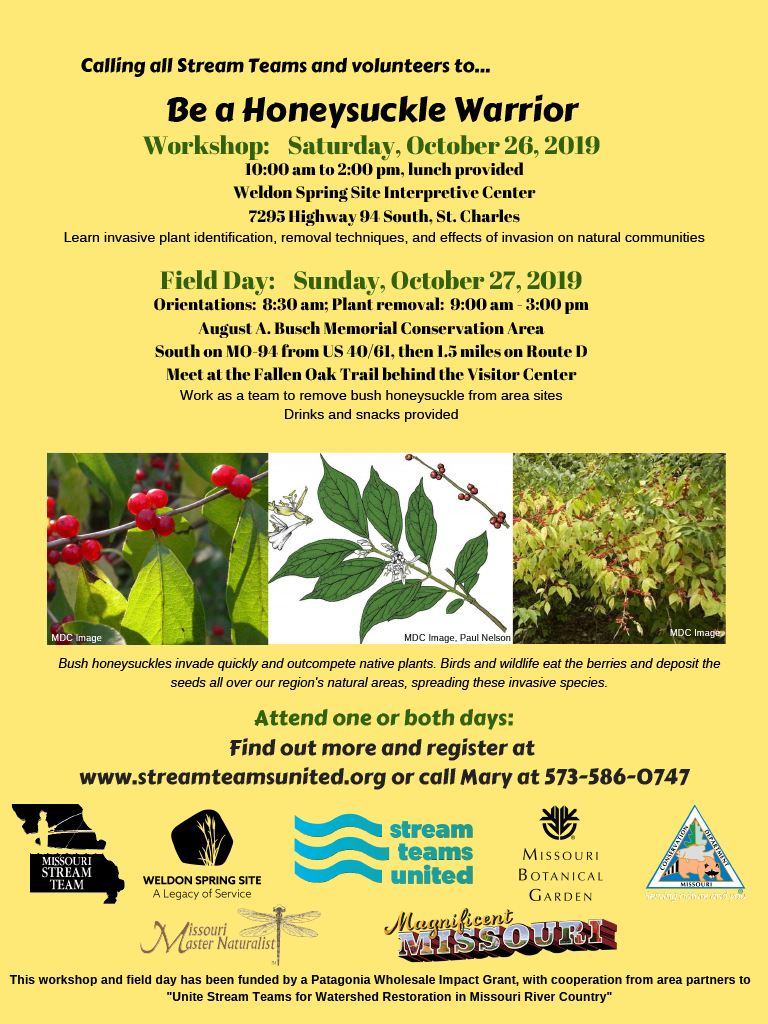